Trying something a bit different, by reviewing books made into movies. I would love to compare the similarities, differences and which was better. ( In most cases, probably the book) Enjoy!

* this review will contain spoilers*

About the Book:
Mockingjay ( The Hunger Games #3) by: Suzanne Collins
Published: August 20, 2010 by Scholastic Press

I saw Mockingjay Part 1 in the theatre last weekend, which probably wasn't the best decision. The theatre was packed! Nevertheless, I did enjoy it a lot. Mockingjay has been the long-awaited conclusion to the Hunger Games series, about a teenage girl sent to fight to the death in a brutal game set up by her government. I will say that the book was very slow for me, so I had high expectations for the movie to be better.

The book and the movie were somewhat similar. All of the characters were kept in the movie, with the same plot of Peeta sending video messages to the rebels through the Capitol's control. The movie kept the new characters: Cressida, Castor and Pollux in the plot, and they were easy to read and follow as well. Jennifer Lawrence, once again portrayed Katniss in the best way possible, keeping her intelligence and wisdom throughout the movie and book. I loved how Gale and Finnick were very much main characters in the movie. (Liam Hemsworth and Sam Claflin, need I say more?!) I wish there was more of Joanna Mason in both the movie and book. She was taken prisoner by the Capitol, but she was still one of my favourite characters. The main difference in the movie from the book, is that it was much more suspenseful. It didn't contain a lot of boring parts at all, which is what I did come across in the book.

I really thought that the movie was better than the book (gasp!) But in all seriousness, it was much easier to follow, much more entertaining and it had the right amount of suspense. I especially loved Jennifer Lawrence's rendition of " The Hanging Tree". She has a great singing voice! What I will warn you about this movie, is that there are a lot of "jumpy" parts. There will be a very quiet moment, and suddenly, something really loud will spring up. It was very shocking! Also, like the book, it can take a while for some rising action, however once you got to the middle of the movie, I couldn't keep my eyes off the screen!

Overall, if you did not like this book that much, do not fret because the movie was very good! I would highly recommend it. 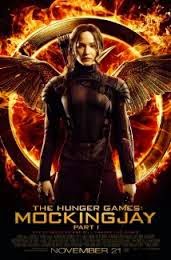 Posted by paperbackprincess at 5:12 pm