Paperback's Pondering's: Why We Need Male Friendship Groups in YA

Paperback's Pondering's is a weekly discussion when I take a topic and well, ponder about it! This week, is all about why I love a strong group of boys in a book.

Last month, I had read two amazing books that really stood out to me. The first was a reread, The Outsiders by S.E. Hinton, and the second was a series, The Raven Cycle by: Maggie Steifvater. Now plot wise, these two books have nothing alike, but for some reason I connected both of them together and recognized that they were both some of my favourite books. I think I now know the reason why, and that is, because I love groups of boys in books!

This seems like a weird topic, but I hope I can explain in as much detail as I can. Basically, a lot of the YA I read contains a female protagonist with female friends. She is supported by her strong group, and then usually a male love interest makes his way into the mix later. Now while I'm all for the girl power, as I can obviously relate to it more, recently I've been really into that sort of brotherly love that you can get from a strong group of boys who share a friendship. It's pretty awesome to see romance take a backseat sometimes.

I can relate this to The Outsiders first. The Outsiders is basically about a group of Greasers in the 50's who struggle with fitting in and protecting their gang from their rivals: The Soc's or "Socials" of the town. The boys make sacrifices for each other and will defend each other no matter what. There are only two minor girl characters in this entire book, with romance only being an itty bitty part of a much bigger relationship. This book really stood out to me because it was refreshing to see boys having as strong of a friendship that we normally see in girl groups.

I absolutely love that books with strong male friendships are less about falling in love and more about helping each other out. There is often a stigma that men do not get emotional and do not show feelings, but these books with male friendships show true heart in friends that often gets overlooked.

Now to The Raven Cycle. The main character of this book is actually a girl, who gains a friendship with "The Raven Boys" and is accepted into their group. While it's awesome to have a variety and see a strong girl in this friendship group, I also love the relationship between the boys. Even though they all come from different backgrounds, they respect and defend each other and understand each other in ways that perhaps a girl couldn't. The friendship relationships actually take over the romantic relationships for me in this book. 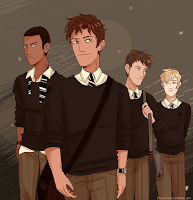 I really don't know where I'm going with this, but I just thought I'd share my feelings that a group of boys in a book can really get me hooked and make me really respect a book. It's something that I've only just realized I loved just recently, as it is not often seen in YA. That being said, any friendship is a great friendship if we're being honest here, and it can be the strongest force in a book.

Do you have a favourite fictional friendship group? Give me some rec's!

Posted by paperbackprincess at 8:35 am