CW: this post will discuss trauma against Indigenous people through residential schools

The whole world has been paying attention to the devastating discovery of a mass grave site at a residential school in Kamloops, BC, in which the bodies of 215 children were found. For those of you who don't know, the residential school system took Indigenous children across Turtle Island away from their homes and into an abusive system which attempted to force the Indigenous culture out of the children. The number of children who died in the system is much larger than what was reported by the Government of Canada, and the schools were run by both the Catholic and Anglican Churches. To this day, Pope Francis has yet to apologize.

For those of you who want to learn more, you can access the Truth and Reconciliation Commission's Calls to Action. The TRC was implemented in 2008 in order to call attention to the abuses suffered by Indigenous peoples in Canada and what the Government and all settlers can do to reconcile with Indigenous peoples.

You can also access the Indian Residential School Survivors Society which offers counselling and support to survivors, and in which you can also donate to.

As a settler, it is crucial that I listen to survivors and turn my anger into action for all Indigenous people. As this is a book blog, one of the most powerful things we can do is read from Indigenous authors, listen to their stories, and uplift them as much as we do white authors. I have had the privilege to read many fabulous books by Indigenous authors across Turtle Island, which I will share with you all. Similarly, if you have any further recommendations, please add them to the comments. We can all turn our love of reading into action.

1. The Marrow Thieves by Cherie Dimaline

Cherie Dimaline is a writer from the Georgian Bay Métis Nation who writes mostly young adult and adult fiction. Her novel The Marrow Thieves is a YA science fiction book about Indigenous families who are on the run from settlers who want to steal their bone marrow in order to gain the power to dream. I have now read this book twice, and I absolutely love it. The book alludes to residential schools through its sci-fi setting, and also contains a tight-knit family who will stick together no matter what. It is a staple in my opinion.

Catherine Knutsson is a member of the Métis Nation, and her novel, Shadows Cast by Stars, is a dystopian tale set on a fictional version of Vancouver Island. In this novel, a plague which only affects settlers has taken over, and so Indigenous people seek haven before settlers come hunting them down for their blood, which may contain the cure. This book has a number of sci-fi elements, and also offers a look into Indigenous spirituality. Knutsson has a magical way with words.

3. Love After The End edited by Joshua Whitehead

This book is a speculative fiction anthology edited by Joshua Whitehead and featuring two-spirit and queer Indigenous authors. I loved the exploration of gender and sexuality that was present in each and every story, as well as general themes of utopia and hope. If you are a fan of spec-fic and also want to learn more about what it means to be two-spirit, give this anthology a read.

Cynthia Leitich Smith is a member of the Muscogee Creek Nation, and she writes mostly YA contemporaries centering around Native-American characters. Her novel Hearts Unbroken is a contemporary book about a Native-American teen named Louise whose brother Hughie is cast in the school play, The Wizard of Oz. However, Hughie's casting stirs up racism in the town as people question his worth in the play, and Louise also struggles with L. Frank Baum's racist past. This book was a fabulous contemporary and I would love to read more by Smith.

Richard Wagamese was an Ojibwe author, whose novel Indian Horse became a bestseller and was even adapted into a movie. In this novel, an Ojibwe child named Saul is forced into the residential school system where he takes up an interest in hockey. However, the trauma he endures in the school carries with him, even when he enters bigger hockey leagues and endures racism from the other players. Richard Wagamese was a fiercely talented writer who everyone should read from. This book deals with some extremely heavy themes, so please be careful. However, I would encourage those looking to learn more about residential schools to read this. 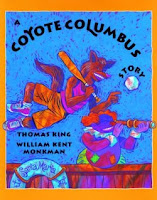 This is a picture book by bestselling Cherokee and Greek author Thomas King. This book retells Christopher Columbus' invasion of North America through the eyes of Coyote, the trickster animal. The illustrations in this book were so vibrant and well done, and this book is great for children to learn more about Indigenous traditions.

7. Dreaming in Indian edited by Lisa Charleyboy and Mary Leatherdale 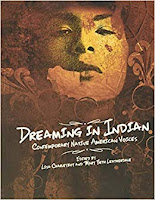 This book is a non-fiction anthology of short stories, poems, and other art by Indigenous creators. The editors did a fantastic job at including a wide range of Indigenous artists from across Turtle Island, and overall this book is intended to inspire Indigenous youth to take up activism in whatever their art form may be.

These are my recommendations for anyone who would like to expand their reading of Indigenous authors. However, I recognize that this list is not complete. Please include any more authors who you love and I will add them to the list along with who recommended them. I want this post to continue to shed light on Indigenous creators and the value that their work brings during a time which is often filled with so much sadness.

Have you read any of these books? What did you think?

Posted by paperbackprincess at 10:28 am