This is Kind of an Epic Love Story by: Kacen Callender

CW: cheating, grief after the death of a parent 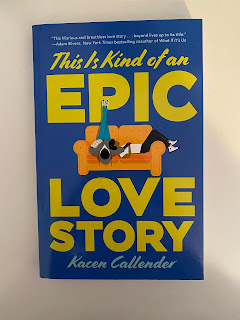 Nathan Bird, a film buff and aspiring screenwriter, has lost all hope in love after his girlfriend Florence breaks up with him. However, Nathan and Florence remain friends, and Florence is determined to make Nathan believe in love again. Enter Oliver James Hernández, Nathan's childhood best friend who has just returned to town. Nathan realizes he still has feelings for Ollie. But can he build up the courage to tell him?

This was my first Kacen Callender book. I saw everyone talking about Felix Ever After, and while I had that book on hold, I decided to give this one a go. I will say, I did not enjoy this book as much as I thought I would. However, I still have faith in Callender's books because I ended up LOVING Felix Ever After. I just think the characters and themes in this novel fell a little flat.

Let's start with the positives. I did think this was a cute and easy to get through novel. In a year that was filled with doom and gloom, it was nice to read something relatively positive and just get a bit of a serotonin boost. I liked how this book did not have many heavy themes or sorrow to it. It's a solid contemporary, and I appreciated that.

I liked how this book incorporated a diverse cast of characters. Most of the characters are LGBTQ+ and POC. The love stories are not really sad and upsetting. The queer characters simply exist without being put through major trauma. This was refreshing to see, and I think is definitely needed in more books.

That being said, I did have a problem with a lot of the character's actions. Nathan is kinda a jerk. Yes, he is a teenager and should make mistakes. However, he does a lot of shitty things to Oliver and his friends, and these actions are swept under the rug without any resolutions. I think it's important for teenagers to learn from their mistakes, and we don't get that here.

There is also far too much cheating in this book for me. Cheating is so common that it's almost written off as normal. Nobody really shows remorse for cheating against their partners, and the cheating happens so quickly that you almost forget it's happened. I think this book didn't do its best to represent healthy relationships and honesty in relationships, and that was unfortunate.

I think Callender is a writer who I want to read more from. I definitely don't want to write them off as a never to read again author, because Felix Ever After was incredible. However, this book didn't blow me away like I hoped it would, which sucked.

Have you read This is Kind of an Epic Love Story? What did you think?

Posted by paperbackprincess at 10:55 am

Email ThisBlogThis!Share to TwitterShare to FacebookShare to Pinterest
Labels: contemporary, kacen callender, this is kind of an epic love story