The Silence of the Girls by: Pat Barker 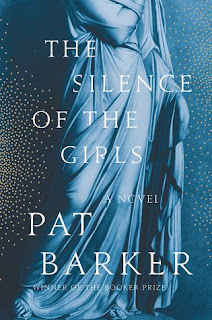 Briseis is a native Trojan, but her world comes crumbling down when the Greeks invade Troy. The Trojan War has begun. Briseis is kidnapped by the Greeks and brought to their camp as a slave. She is set to be a slave to Achilles, however Agamemnon also demands that Briseis belong to him. Achilles refuses to fight in defiance, and Briseis observes the two men fight for power. Briseis' story echoes that of many Trojan women during the war. These women were forgotten and abused, forced to endure trauma despite having no say in the war whatsoever. This novel seeks to tell their story.

To say that I wanted to read this book would be an understatement. I have wanted to read this since it came out two years ago. But for some reason, I didn't get the chance until now. I absolutely love Trojan War retellings, and I figured that a book from Briseis' perspective would give a voice to a character who in the Iliad, is essentially voiceless. However, I can't say that this book was fully enjoyable. It was just... ok.

I think Barker writes really well. This was my first time reading one of her novels, and her vivid descriptions really help to establish the world building in this novel. She did a great job at setting the scene of the war, and nothing was glazed over. I think it is definitely needed in a mythological retelling to make sure that the reader gets to know each and every character that plays a part in the story. Barker does develop all of the significant characters.

I will read any Trojan War retelling, and I will most probably not hate it. I'm very fascinated by the story of the Trojan War, and I'm always curious as to how different authors characterize the characters. I think Barker gives a great voice to Briseis, and I loved how she was the storyteller. Her perspective is one that I have always been curious about, and I'm happy that Barker took this opportunity to tell her story. Despite this story being a myth, you can't help but think about the countless women in Ancient Greece who did have to go through this trauma during war. It's a necessary story to tell. However, that being said, the story is also very disturbing with a lot of graphic descriptions. So be careful when reading, and be aware of the content warnings.

Like I hinted at before, I didn't love this book. And this is because Barker chooses to give Achilles' perspective about halfway through the novel. I thought this was unnecessary, as well as counterproductive, because the whole point of the novel is to give a voice to the Trojan women. By doing this, I think Barker attempts to humanize Achilles. But Achilles is canonically an asshole. Similarly, there are already a ton of books telling his story. We don't need it, and it significantly took away from my experience with the novel.

I saw someone review this book saying that they think Barker actually wanted to tell Achilles' story, she but realized that was overdone, so she hid Achilles' story in a story of Briseis. I definitely see how this might have been the case. This book was too Achilles heavy, which disappointed me. Nobody needs an Achilles redemption arc. Give me the stories that haven't been told.

Overall, this book was an example of one that I was so looking forward to reading, but it did fall short. It wasn't all bad. Like I said, Trojan War retellings pretty much always get at least a three star rating from me, because I love the story so much. However, I'm not sure this is the best retelling out there.

Have you read The Silence of the Girls? What did you think?

Posted by paperbackprincess at 9:08 am