Re-Reading The Hunger Games: My Thoughts 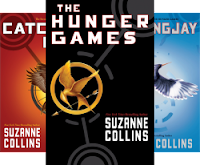 This post is well overdue since I am already into summer but- remember that YA fiction course I took where I discussed Twilight? Well, we discussed The Hunger Games too and I thought I'd do a post on it as well! This post will be comprised of all three books in the trilogy, because most of my thoughts are the same across the entire series. So, here's what it was like to re-read The Hunger Games series, eight years later!

Let me start off by saying, that when I first read the series in 2011, I hated it. I thought the first book was ok, but as the series progressed I found it boring and confusing. Come to think of it now, I honestly think that I personally hadn't matured enough to fully understand the intense political themes in the series. Now more than ever, I have a new appreciation for all that Suzanne Collins was trying to convey.

My professor pointed out that the romance isn't the central plot in this series, as opposed to Twilight, and I would totally agree. Instead, I think we get a really in-depth look at political divide, as well as some allusions to the two opposing sides of the political spectrum. Hear me out, the Capitol represents heavy spending, frivolousness, a divide between the rich and poor. In Mockingjay, District 13 is presented as radically opposed to the Capitol, everyone is equal, though their rebellious tactics aren't exactly moral. I think that Collins did a great job at capturing the difference between the two extremes of the political spectrum. It all totally makes sense to me now!

When I got to Catching Fire, I reminded myself how much I love Finnick Odair. His character development is truly 10/10 and my professor pointed out how awesome it was that he didn't really portray hegemonic masculinity as much as Gale did. Finnick should be protected at all costs.

I found myself being less interested in whether or not Katniss chooses Peeta or Gale and more on whether or not she would be swayed by Snow or Coin. The ending of Mockingjay was so unbelievably epic and should go down as one of the greatest plot twists in history. While my class did have a bit of a problem with the epilogue, and I agree, I do think it reduced the power of Katniss' character a lot, I would still say that the ending is satisfying.

Overall, I am really happy that I found a new appreciation for this series. It is political, powerful, and presents morally ambiguous characters that you can root for and somehow also end up hating. I loved every second of this re-read.

Have you read The Hunger Games? What did you think?

Emily @ Paperback Princess
Posted by paperbackprincess at 9:08 am