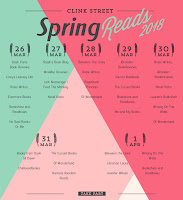 This year, I'm taking part in Clink Street Publishing's Spring Reading Week blog tour! So to go with the event, here is my review of Discoucia by: Nicholas Lovelock:

Sir Arthur Pageon is protector of the realm of Avalonia, a magical land full of monstrous creatures, and the Discoucian Monarchy. Returning home from one of his quests, he discovers that he is being followed by The Purple Guard, a rebellion group led by his sister, Queen Lily Pageon. Lily longs to take over the Discoucian monarchy. However, the heir to the throne, Princess Josephine, knows of her plot, and her and Arthur will embark on a journey all across Avalonia to try and stop Lily from taking over the kingdom.

This book is about as fantasy as you can get! It had fantastic world building, incredible descriptions of setting, and will fully engross you in the world. The tone was humorous and witty, which brought a unique charm, and I think all fantasy lovers would love this. While I had some issues with it because of the fact that I do have a love/hate relationship with worlds as complex as this, I think that it will capture the hearts of all fantasy die-hards.

The characters were also really well written. You have some typical characters of magical kingdoms, such as the Knight, the Queen, the Princess, but they were really different and their personalities were quite interesting. I especially liked the whole aspect of Lily being a tyrannical dictator, and the fact that she was related to Arthur. I thought that brought a cool dynamic.

I think the main problem why I couldn't be fully into this book was because the plot was too complex for me. I didn't feel really connected to it as there were a lot of different settings, characters, and organizations and I had trouble following. I found myself having to go back and re-read sections to understand what was going on, which I didn't really like. That being said, if you take things slow with this one, or if you're used to reading fantasy all the time, you may really like this.


About the author: Based in a small village in Oxfordshire Nicholas Lovelock is the author of the Alavonia series. As well as a passion for history, Nick holds a keen interest in Numismatics —the study and collection of coins, banknotes and medals— counting a 200 year-old 1826 half-crown and coinage of monarchs like Queen Anne, Elizabeth the First and Henry the Eighth as part of his collection.
Thanks to Clink Street for including me in their blog tour! Be sure to check out all the other posts going up this week with the #SpringReads


Posted by paperbackprincess at 9:50 am