Hello everyone! I'm very excited to be hosting an author interview with Jessica George today, author of the YA fantasy, Gifted! 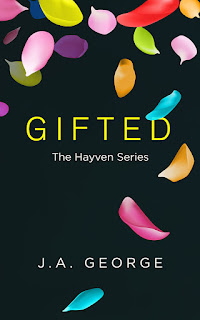 There is no chosen one in this story. She was just in the wrong place at the wrong time and happened to make a decision that altered her future forever. It happens to all of us every day.

Avery Gray is a size twelve university student with a penchant for dry humour, and she’s as normal as they come. Up until now, the biggest choice she’s had to make was glasses or contacts? At the moment, it’s stay and save, or leave and be saved.

Allow me to explain. One rainy afternoon, Avery had to make a choice: go through the alleyway or around it. Two possible options. One would have had her future continue on as planned, the other would ensure that her future never remained the same again. She unknowingly went with the latter. But change is not always bad. Avery meets Theodore-James Connors, an enigmatic young man who takes her to Hayven, a city separated from the rest of the world, where only gifters – ordinary people with extra-ordinary gifts – can go. She soon finds herself in a close-knit group of friends she’d never have imagined herself in; friends who are diverse in every possible way, from their ethnic backgrounds, to their personalities, from their gifts, to their life stories. Friends who make her laugh, who make her cry, who make her think and who make her…her.


However, change is not always good. The beautiful, golden city of Hayven has its dark side - Cliders. Gifters turned rogue, aka, Cliders are determined to aid fallen Clider, Madrina, return to rule Hayven. They will stop at nothing to make that happen, including harming those Ava has grown to love. Again, Ava is faced with a choice: spend her days finding a way to inhibit Madrina’s return, or walk away. After all, she isn’t the chosen one. Yet, there exists a third option - rig the future itself.​

Hello there Jessica, and welcome to my blog! I’d like to start off with asking, how did you come up with the concept of your book? Was any of it drawn from personal experience?

Choices are a large part of the book. Ava could choose to go into the alleyway, or not. She could choose to walk away from the growing problem, or try to fight Madrina’s return. What choices do you think you’d make in these situations?

Knowing me, if I was running late, I would have gone into the alleyway despite the fact that they creep me out because I would assume nothing bad would happen to me! We all hear those stories of people making a choice that resulted in an unfortunate consequence, but when it’s time for you to make a similar choice you’re just like, “Nah! Nothing will happen to me! That was a one-time thing!” So I’d go through the alleyway thinking, since it’s already happened to someone else, it won’t happen to me. I’d also choose to fight Madrina’s return because I have too much of a conscious to let innocent people die when there may be something I could do about it.

Is there a character in the book who you relate to most? Are you more of an Ava, a Madrina, or Theodore?

Literally all of them. Yes, even Madrina. I’m not a crazy murderer, I promise! It’s just that, despite Madrina being the antagonist in this novel, she isn’t a senseless murderer. She doesn’t want to rule Hayven because she likes the idea of sitting on top. She fights because of the same reason Ava does – she truly believes she’s doing the right thing and she comes up with some very justifiable reasons that actually make you stop and think, hold on, she might be on to something. Madrina can explain why she does what she does and they’re not brainless, selfish answers either.

I relate to Theo because he’s a little on the weird side. I got tired of reading about the hot protagonist and the hot, bad-boy love interest because that wasn’t relatable; the bad-boy isn’t everyone’s type. So I went for something a little different. Theo isn’t smoking hot; you like him more for his weird personality rather than his looks. However, because so many readers are into this type of male protagonist and seem to expect a romantic relationship to form, a few readers say they don’t feel a connection when it comes to Theo and Ava’s love story and I’m just sat screaming at my laptop screen, “THERE IS NO LOVE STORY!” Ava and Theo are not in love because they’ve just met and I don’t believe in instant love. I believe in instant lust, infatuation or plain old interest, but not instant love. I relate to Ava the most because she’s relatable. She’s the most human character I think I’ll ever create.

What do you think sets Ava apart from a typical “chosen one”?

That she isn’t one! You don’t have to be a chosen one to make a difference and that’s what I’m trying to get across in this book. You can change the world for the better simply because you want to, not because fate made you.

Diversity plays a role in the novel, Ava’s friends are all unique and special in their own way. How important is diversity to you in YA?

Very important. It is no secret that YA books are severely lacking in diversity; there’s just no question about it. Thanks to this, most books just aren’t relatable. I was born and raised in London, one of the most diverse cities in the world, so when I read a book where the majority of the characters are from one race group, the book makes less of an impact on me because it isn’t realistic and it isn’t relatable because the lack of diversity isn’t my world. In the next three books of my series I plan to introduce more diverse characters than seen in book one. I’ve already plotted story-lines and roles for Asian characters, Muslim characters, Latin characters and homosexual characters. I love diversity and I intend to pile it into my books as much as I can get away with!

What extraordinary gift do you think you would be sent to Hayven for?

I’d love to have invisibility. Think of all the mischief! Or I’d like to fly so I can fly through clouds, just to see what they feel like.

Lastly, do you have any advice for aspiring authors who want to approach diversity in fantasy? Did you need to do a lot of research on different diverse issues and spectrums?

I am a firm believer of writing what you know. If you write on a topic you have no clue about, it tends to show in your writing. Like I said, I love diversity because one of my biggest fears is ignorance. My friends come from all over the world because I’m attracted to people who are different from me, who can teach me about places, cultures and religions I never knew much or anything about! I didn’t do any research for Gifted because I grew up in a diverse world and because I like to learn about other people, I ask questions and I’m rewarded with answers. So as the years have gone on, I’ve accumulated a bit of knowledge on certain things. If I need more, I ask my friends! Researching on search engines can be rather tricky because you tend to get opinions rather than facts, and a lot of mixed ones for that matter. My advice is, if you want to write about diversity, ask diverse people. You might make a few friends along the way!

Thank you very much to Jessica for allowing me to interview her and for sharing her book with the world! Be sure to check out Jessica's website for all news on Gifted!

Emily @ Paperback Princess
Posted by paperbackprincess at 7:18 am