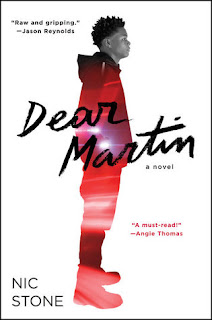 Justyce McAllister is a bright teen set on going to an Ivy League university. But his confidence is shattered when a white police officer puts him in handcuffs for no reason. After receiving targeting from his classmates due to the incident, Justyce begins writing letters to Dr. Martin Luther King Jr., hoping to find some answers to the world he is living in. Justyce's life is once more turned over when he is targeted by another white cop, this time while driving with his friend Manny. Justyce is trying to recover from one tragedy after another, and all the media cares about is labelling him and other Black teens as the villains. He begins to lose hope, but seeks comfort in the civil rights activists who came before him.

I read this book all in one sitting. It is not for someone looking for a light read. It is heartbreaking, disturbing, and unfortunately so incredibly real. I completely understand, especially nowadays, if people would rather seek stories featuring Black teens who are happy, without tragedy. I need that too. But, I do think this book was an emotional experience that was important, as a non-Black person, for me to go through.

Justyce was an incredible character. He is so well-rounded, and Nic Stone writes teen characters very well. I appreciated how Justyce went through a range of emotions throughout the novel. He is not put in this position where he needs to be the hero, he needs to have it all together and never break down. Justyce does lose hope. He is recovering from some serious trauma. Stone represents him as an average teen who has had immense pressure put on him. I appreciated that Justyce is well-developed throughout the novel.

I thought the format of this novel was super unique. The incorporation of the letters to Dr. Martin Luther King was a great idea on Stone's part, because it gives us a look into Justyce's mind as opposed to just the story that is going on around him. The letters are so personal and real, it almost seems like Justyce is a real person. I thought that displaying this book as someone from the modern world, looking back to someone from the past, was a really great way to display topics such as racism and police brutality. Because we do see everyday how history repeats itself. Stone is able to represent this in a poignant but also powerful way.

I think it is my duty as a non-Black person to read the stories of Black people, both the good but also the bad. This book not only shows the racism that Black people endure on the macro level, but also the microaggressions that occur in Justyce's own school community. We know these stories are disturbing, and we usually avoid talking about them. But, when we avoid talking about anti-Black racism because we fear we're getting too "political" then we are entering a harmful idea that human rights are somehow political, which they are certainly not. Talk about anti-Black racism. Support Black authors. And don't expect Black people to have it all together to educate you. Do the work yourself. Black Lives Matter.

Posted by paperbackprincess at 9:30 am