My Love for the TV Show "Pose" #BlackTransLivesMatter 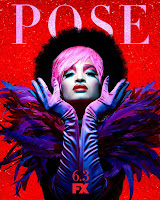 Hi all. I'm sure you are all aware of the extensive activism people have been doing over the past few months to combat police brutality and racism. I've seen a lot of people sharing books, movies and other pieces of media that they think accurately portrays the experiences of Black people in North America. So, given that it is Pride Month, and given that violence and murder against Trans people is an epidemic in North America, I felt like I wanted to share an amazing tv show that has really amplified the voices of Trans POC. It is Pose.

Pose is shown on FX, and I also believe it is available on Netflix in the US. It is about the lives of the Black and Latinx LGBTQ+ people of New York City, as they compete in the ballroom culture scene during the 1980's. The main character, Blanca Rodriguez-Evangelista, is a Puerto-Rican Trans woman who creates her own house to compete in the balls, against her former house mother, the badass and glamorous Black Trans woman Elektra. Along the way, the show discusses the HIV/AIDS epidemic that impacted the LGBTQ+ community, and the government's lack of response. Race, gender, and the aspect of a chosen family play huge roles in this show. It is heavy material, but it is also incredible.

A few stylistic things about the show that I love. The soundtrack is incredible!!! I absolutely love 80's music, and found myself bopping along to the background music on multiple occasions. Not to mention that Broadway master Billy Porter is also on the show, meaning that the show does have a lot of musical theatre undertones. The costumes are amazing, the dance moves are OFF THE CHARTS. Seriously, the vogueing in this show puts Madonna to shame. (And Madonna's adaptation of vogueing does also come into play in the show).

Those a few of the more light-hearted things I love on the show. But at its core, this show does have some very important messages. Most of the characters on the show were disowned from their biological families, leaving them to be adopted by safe houses led by members of the LGBTQ+ community. These houses become a family. Blanca Evangelista is officially my favourite tv mother I've ever watched. She's just incredible.

Racial tensions play a huge factor. The characters are often subjected to racially and transphobic motivated attacks. In the second season, a very heavy episode sheds light on murdered Black Trans women. It was a very sad episode, but it was also such an important one to watch. It really exposed the violence that goes on against this community in real life, and what we can do to stop it.

Every episode ends with a quotation from an LGBTQ+ activist. I love reading these quotations as they seem to encompass the message of the episode and they also offer an answer to the question "where do we go from here?" I feel like often when watching pieces of media like this, people are left wondering: "ok, I've watched the show. I've read the book. Now what do I do?" This show has motivated me to become a better ally, to make sure my feminism is ALWAYS intersectional, and to pay attention to the ways in which my privilege as a cis-gendered and white passing woman protect me from harm everyday. So, after you've signed the petitions, contacted your leaders, and donated if you are able to, I would highly recommend this show. As Billy Porter said when he accepted his Emmy for his role in this show, "The Category is Love."

Have you watched Pose? What did you think?

A few resources to protect the lives of Trans POC:

https://www.change.org/p/justice-for-tony-mcdade (Petition for Justice for Tony Mcdade, a Black Trans man killed by police in Florida)

Actions and Resources for Solidarity  (this is a link to a google doc that has a bunch of links to petitions, charities, and organizations surround Black Trans Lives)

https://www.thetrevorproject.org/ (A mental health hotline and resource site for LGBTQ+ youth. If you are a member of the LGBTQ+ community and are struggling, you can call them at 1 866- 488- 7386. They also have a number of helpful educational resources on their site!)
Posted by paperbackprincess at 8:50 am