The Absolutely True Diary of a Part-Time Indian by: Sherman Alexie 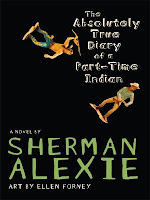 Aspiring cartoonist Junior lives on the Spokane Indian Reservation, and is determined to succeed. He decides to leave his school on the rez and move to the all-white high school across town, and is immediately caught in a world of racism and ignorance. But Junior isn't here to get angry, instead, he expresses his feelings through humorous cartoons and witty dialogue, that puts a comical, and yet very real reality of Aboriginal rights, that we still can't seem to grasp today.

This book was real. However, it wasn't deep, dramatic, or emotional in any sense. The book is funny; it's supposed to be, which was such a unique way to tackle what we know about racism against First Nations peoples and what it means to fit in.

As Junior is a cartoonist, the book has a lot of cartoons by "Junior";as he draws the people in his life. These were the main sources of humour, as his drawings of both the white and Spokane people were extremely accurate as to what he was describing and also had the complete tone of a teenage boy. They were such a unique touch.

This book is not serious, and yet so serious at the same time. Alexie chose to talk about harsh issues on racism, reservations, and the troubles of Juniors family, and yet the dialogue is completely sarcastic, informal and even a bit risque at times. I think this is what really sold the book to me, because I knew I was learning a lot from it, and yet it didn't seem hard to handle. It was extremely easy to get through and I couldn't put it down.

I have read books that take place on reservations before, but this was my first fictional one and my first one that doesn't portray it in such a serious sense. Now I don't know what actual Spokane people think of this book, as I think the way Junior talked about some things could be seen as insensitive to some, but I think the dark humour in this book really hits you deep and makes you think hard about the conditions that these people are put in. It helps to put your own life into perspective. I definitely think that the North American governments need to think long and hard about what they've actually been doing to "help" these people, besides taking over their land. I think this book is important, and I was happy to read it.

Have you read The Absolutely True Diary? What did you think?

Posted by paperbackprincess at 7:25 am