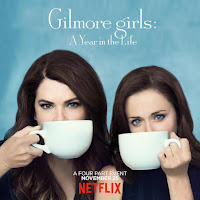 If you haven't been living under a rock, then you probably know that last Friday, the highly-awaited revival to Gilmore Girls came out. The revival featured four mini movies, each representing a season in the year of 2016 for our beloved Gilmore Girls.

This show is my life, my soul, so just everyone else, I was anxiously awaiting to see what the last four words were. I finished the entire series in the day it premiered, and I just realized that I had so many feelings that I just needed to review it. So I'm sorry if this isn't book related, but I just need to vent, rant, and SCREAM over all the events.

Also, this review will contains TONS OF SPOILERS! It would not be worth whiting out that many spoilers, so I WILL NOT BE CENSORING THE SPOILERS! Everything is on the table here, so PROCEED WITH CAUTION!

Lastly, this post will be LONG! I have a lot of feelings ok?!

Ok, so let's start with Winter:

Here, we've got the "pilot" to the series. We get to see what everyones been up to since 2008 when the series ended. Lorelai and Luke are living together, but un-married, Rory is splitting time between London and The States, with no permanent residence and picking up any journalism gig she can get. Sookie has abandoned the Independence Inn, Lane is living in one happy, musical family, Kirk is up to his usual antics. And Richard Gilmore has sadly passed away. Really, there weren't any major surprises here.

I really enjoyed this episode. I thought that it really set up the scene well, and everything seemed to have that usual Stars Hallow magic. I especially like how Richard's funeral was handled. Once again there was a major fight between Emily and Lorelai, because really, what else is new, and Richard's death seemed to be the spark that ignites this emotional rollercoaster of a year.

I really liked how all of the characters acted in this episode, except for Rory. I never liked Rory. I know, how can you love a show without liking the main character, but hear me out. Rory was little miss perfect. That town worshipped the ground she walked on and to be honest, if I lived in her town and was her age I'd be pretty pissed that she was basically the only teen anybody cared about. In the revival, not only was she incredibly all over the place, but she was a mistress to Logan!!!

Now this seriously ticked me off. Rory, first you broke up Dean and Lindsay by being the mistress, and now Logan of all people?! I freaking HATE Logan. He is a rich-entitled white boy who did not respect Rory or her family. And now she's friends with benefits with him??? That did not resonate well with me. Rory, get some morals, you can't get any boy you want.

I also didn't like how they portrayed Sookie as being the bad guy? I get that Melissa McCarthy couldn't find the time to join the revival until the end, but I wished she had a better reason for leaving the Inn! I missed Sookie and Loralei's friendship :(

In Spring, Lorelai and Emily are attending therapy, Rory is struggling to find work and still giving Logan the time of day. But Paris comes back and better than ever!

Paris was the saving grace for me in this episode! She was so hilarious at Chilton and I loved every one of her lines. She was basically the only funny part of this episode.

Everything else was pretty boring. There's a lot of Rory's career business with a lot of new characters, which was just really random. I also have a complaint about Luke as I've noticed throughout the two episodes. He lost most of his sarcasm!! He was a lot more dry and emotionless than the funny Luke we all know.

Lastly, WHERE IS DEAN AND JESS?! Logan is my least favourite boyfriend and why is he getting most of the screentime??? Give me Jess already!!

This episode was one emotional rollercoaster. Lorelai and Emily are once again fighting, as is Rory and Loralei towards the end of the episode. Lorelai finally realizes that she doesn't like where her life is going and so she decides to "do Wild". As in go on a spiritually moving hike to find herself. Also, Stars Hallow: The Musical is a thing???

This episode was kind of a let down. What was with the ten minutes worth of musical footage?? It was stupid and boring and not funny at all.

This episode was not that funny. It was may more philosophical and dramatic. However Jess finally comes back and has a heart to heart with Rory, which I found very sweet. I love you, Jess.

Finally the finale!! This episode was funny, sad, sweet and left me in a puddle of mess. Lorelai shares a heart to heart with her mother about her father, then goes back to Luke and he proposes. They're getting married!! Rory comes back to help the preparation. Also, Sookie comes back finally! And for such a short time too, but it was worth it.

One thing that did it for me in this episode was Dean. Dean and Rory's part was so CUTE and I loved how they were on good terms. Plus, that CORNSTARCH LINE! Ugh I love those two.

Jess was my sweet little cinnamon roll in this and I could not have felt more sorry for him. He was the one who pushed Rory to write her book and she barely gives him a glance. You could tell he still has feelings for her and I just :(((((

I loved how Luke and Lorelai's wedding was shown. The dancing montage, the decorations, the hat, everything was just perfect. I also loved that Kirk moment, I was a crying mess at this point.

Emily and Lorelai are finally on good terms. Emily moves to Nantucket to embrace a simpler life, and you can tell she's a lot happier. It was so sweet.

And finally, the last four words. With about 10 seconds left in the show, the four words are.....

AND THEN THE CREDITS ROLL! What the actual hell???? You do not end a series like that! This freaking MESSED ME UP AND LEFT ME WANTING SO MUCH MORE! I need more episodes, I need to see what happens! More importantly, WHY IS LOGAN THE FATHER??? Rory doesn't technically choose any of the boyfriends in the revival, but it is implied that Logan is the father since he is the only one she sleeps with. It PISSED ME OFF that once again, Logan reigns supreme. I hate those two together and I never will like Logan.

Overall, I understand the four words. I knew they were coming, I even predicted it throughout the show, but I hated Logan's position on it. Also I hated how it ended on a cliffhanger, no "10 years later" thing or anything to show me how this plays out. It was cruel to leave us hanging!

Despite it's ups and downs I actuallly really liked the revival. It made me all happy inside to see all the characters again, although I was not happy with the ending. If anything, I was more happy with the original series ending, as I could have been happy not knowing that Logan fathered a child with Rory. This is the problem with revivals. They leave you hanging and then you're left with nothing. While there were some boring parts, I did like how *most* of the characters ended up and I can only wish that there will be some sort of update. Now if you excuse me, I'm going to go rewatch the series.

Have you watched the Gilmore Girls revival? What did you think?


Posted by paperbackprincess at 7:25 am