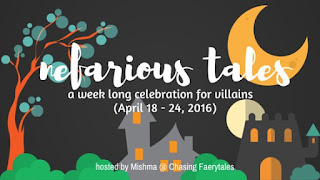 Welcome to Nefarious Tales, a week dedicated to all things villainous and hosted by the awesome Mishma @ Chasing Faerytales! Be sure to check out her blog for all of the details and for her corresponding posts. Today, she's Talking about Antiheros! Also be sure to visit the other lovely participating bloggers who have put up posts today:

Mishma's also hosting a giveaway all week long so stay until the end of this post and enter!  Without further adieu, here is my villain post, dedicated to the baddest, the meanest, sometimes the funniest villains in the beloved series of... HARRY POTTER!

We all know that the main bad guy in HP is none other than Lord Voldemort, yes I said his name! But he is not the only one! There were so many scheming, slimy villains that sometimes get ignored. I'm going to be breaking them all down, which ones were successful, which ones had a soft spot, and which ones were just down right sadistic.

Let's start things off with the main man himself. Voldemort obviously had his faults, wanting to take over the world and having a FREAKING SNAKE AS A PET! But to be honest, this guy was really damn unsuccessful for someone who knew Harry's whereabouts at all times. Seriously though, why did it take the guy 7 WHOLE YEARS to try to kill Harry? He got beaten by an ELEVEN YEAR OLD KID! Not very smart, that Voldemort.

Now let's get into Voldemort's fearless group of death eaters. Bellatrix was the borderline psychotic one. Escaping from Azkaban to help kill didn't really help her matters, but you have to admit, Bellatrix had ambition, and she always got what she wanted, even if that meant killing Sirius. (sniff, sniff) Overall, she seeked power, that's for sure, but you gotta hand it to her, she was successful in what she wanted until the very end. 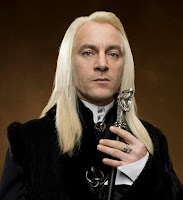 Ahhh the Malfoy's, what a controversial bunch. Lucius definitely wins first prize for best hair, look at those locks, but he did earn one not so great title, and that is: coward. Lucius tortured muggles alike since he first appeared, and he did anything to screw up Hogwarts. However once the end came and Voldemort was about ready to kill him and his family, he jumps onto the rebellion's bandwagon as if he's been there all long. Lucius, you need to sort out your priorities.

Now to someone who I actually kind of respect in a way. Narcissa was nothing like her insane sister Bellatrix, and all she really wanted was to protect her son. She ended up saving Harry's ass in the end, which was a big plus, and all she wanted was for her son to be happy. You go Narcissa!

Oh Draco, poor little Draco. The poor kid couldn't really help being born into an evil family. and that left him with no choice than to follow their lead. The truth is, I respected Draco. Even though he was a bit of a bully, he didn't know any better, and I think he turned out fine in the end. 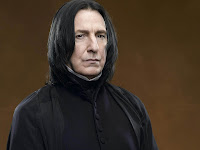 Here's the big debate! I'm going to keep this short and sweet: I don't think Snape is a good person. Yes perhaps he was the "bravest man Harry ever knew", but the point is, he was cruel to Harry from day one, all because his mother rejected him. I'm sorry Snape, but I never liked you.

Ending this off by one of the most IRRITATING, the most ANNOYING, the most CRUELEST PERSON EVER IN THE WIZARDING WORLD! Umbridge was straight up horrible, she took pleasure from other people's pain, killed off innocent muggles, and even though she did not support Voldemort, she was equivalent, if not worse than him. Umbridge, YOU GRIND MY GEARS!

That's just my opinions on some of the most prominent villains in Harry Potter! Which ones are your favourite/ least favourite?

And now to the good stuff! Mishma is hosting an INTL giveaway to celebrate, where YOU could win a mystery villain prize pack! Enter here!

That's it from me! Make sure to follow Nefarious Tales all week long and to grab the hashtag #NefariousTales as there will be a Twitter Chat on Friday at 7 pm EST! Hope you all can join us!

Posted by paperbackprincess at 7:10 am